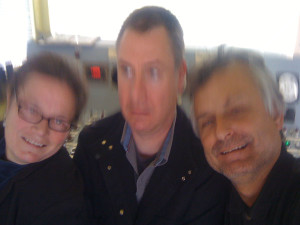 Kevin Evans  ( pictured center) is a games industry professional with a history of SF Cacophony involvement that reaches back to his art school days. Kevin Evans is a native Californian, born in San Luis Obispo, and resident of the San Francisco bay area since 1985. Chosen mediums are painting, printmaking, sculpture and digital media. Since 1995, Kevin has worked as an artist in the CGI/computer games industry. Professional associations include: Lucasfilm/Lucasarts Entertainment Company, Take 2, Activision, and Sony.

An early Cacophony member, Carrie Galbraith  ( pictured left ) maintained the cacophony precepts in her travels and while living abroad, pranking the Venice Biennele and other venues in Italy as well as events while a Fulbright Scholar in Romania. Carrie Galbraith picked up a Rough Draft newsletter in a café in San Francisco in 1986. She attended her first event shortly thereafter and immediately subscribed to Rough Draft. She then became involved for many years in both the Editorship of Rough Draft and producing many types of events including initiating the Zone Trip concept, the Atomic Café and others

John Law ( pictured right) has been integrally involved in creating underground culture for 35 years. He has climbed the Golden Gate Bridge over 100 times. He joined the San Francisco Suicide Club in 1977 and helped create the Cacophony Society in the mid-80’s. He was co-founder of the Burning Man Festival. Under the pseudonym Jack Napier, He founded the Billboard Liberation Front; this group is generally credited as one of very first of the “Culture Jamming” groups. This social movement promoted by Adbusters magazine inspired the “Occupy” culture of recent times.