This show is not a retrospective, rather a small selection by Steven of two memorable BLF “Improvements” with beautiful photos by A. Leo Nash and Nicole Rosenthal. We’ll be sharing the gallery with  Anthony Discenza, Jacqueline Gordon, Victor Moscoso and psychedelic poster artist Robert Fried. The opening is this Saturday the 12th of July, 2014. I won’t be there – I’m off on a UE trip to the Midwest. Other BLF Ops may be in attendance. Steven is planning a closing party for August 16th which I will be attending – I’ll be missing Lynyrd Skynyrd to be at this closing party, a sacrifice I had to make, so I hope you will drop what you’re doing and stop on by too.

The BLF finally retired a few years ago after a 35 year run. It had been a lot of fun, but the thrill was gone. Addressing later generations in a book foreword, Shepard Fairey said (to paraphrase a bit):  “Check out the BLF, they’ve been hacking billboards since before you were born!” And that was  years ago.

Then, a few years later, I was inadvertently outed by my pal, rocker Anton Newcomb and, unlike Banksy, no one seemed to notice or much care. Ow! Then I outed long time copywriting partner and retired BLF propagandist Stuart Mangrum “_____ DeCoverly”. Bruised egos crave company….  Well, I had to remind myself, it was a heckadventure and, after any number of close calls, we remained unscathed, un-injured (35 years and not one single work place accident!) and with the exception of the initialSuicide Club improvement in 1977, un-captured. We had stayed incognito, using silly nom de guerres, sporting masks, dyed hair, funny glasses and the like, for decades. We kidnapped journalists, shocking and amusing them enough that they wrote about our exploits with humor and energy without being too critical.

By the end of the new millenniums first decade, the new generation of BLF Ops had moved on to the serious pursuits of middle age. Many passed thru the organization over the years, most were fellow pranksters in Cacophony and the earlier Suicide Club. Co-founder Irving Glikk (David T. Warren, co-founder of the Suicide Club and early ignitor of the silly wooden figure now worshipped on the Black Rock Desert each year) passed away in 2010 at seventy-one. Dave was one of the great inspirations in my life. He was the “Spirit of Chaos” in the Suicide Club. Once in the late 70′s as I was just embarking on a lengthy solo cross-country hitch-hiking adventure, Dave with somber mien, gave me a giant rubber thumb declaring: “Here kid, you’ll need this on the road!”

The BLF was a primary creative outlet for me for many years, but all things come to pass. I’ve settled into other pursuits in recent times, becoming more interested in and energized by slipping back into small group UE adventures, restoring the ridiculous and sublime giant DogHeads that I somehow have become responsible for, and knocking off the occasional book event for our history of the Cacophony Society with co-author (and past BLF Art Director) Carrie Galbraith “Ethyl Ketone”.

Former BLF operative Conrad Hoc “Scott Beale” our first webmaster, got us online initially, and way back in the 90′s convinced me of the importance of the digital realm as a means of archiving and preserving work done in meat space. Milton will probably link this blog post to the official BLF website<billboardliberation.com> and we’ll call it a day with the exception of any future gallery, academic, historical or law enforcement interest (the statute of limitations is closing fast, fellas..) 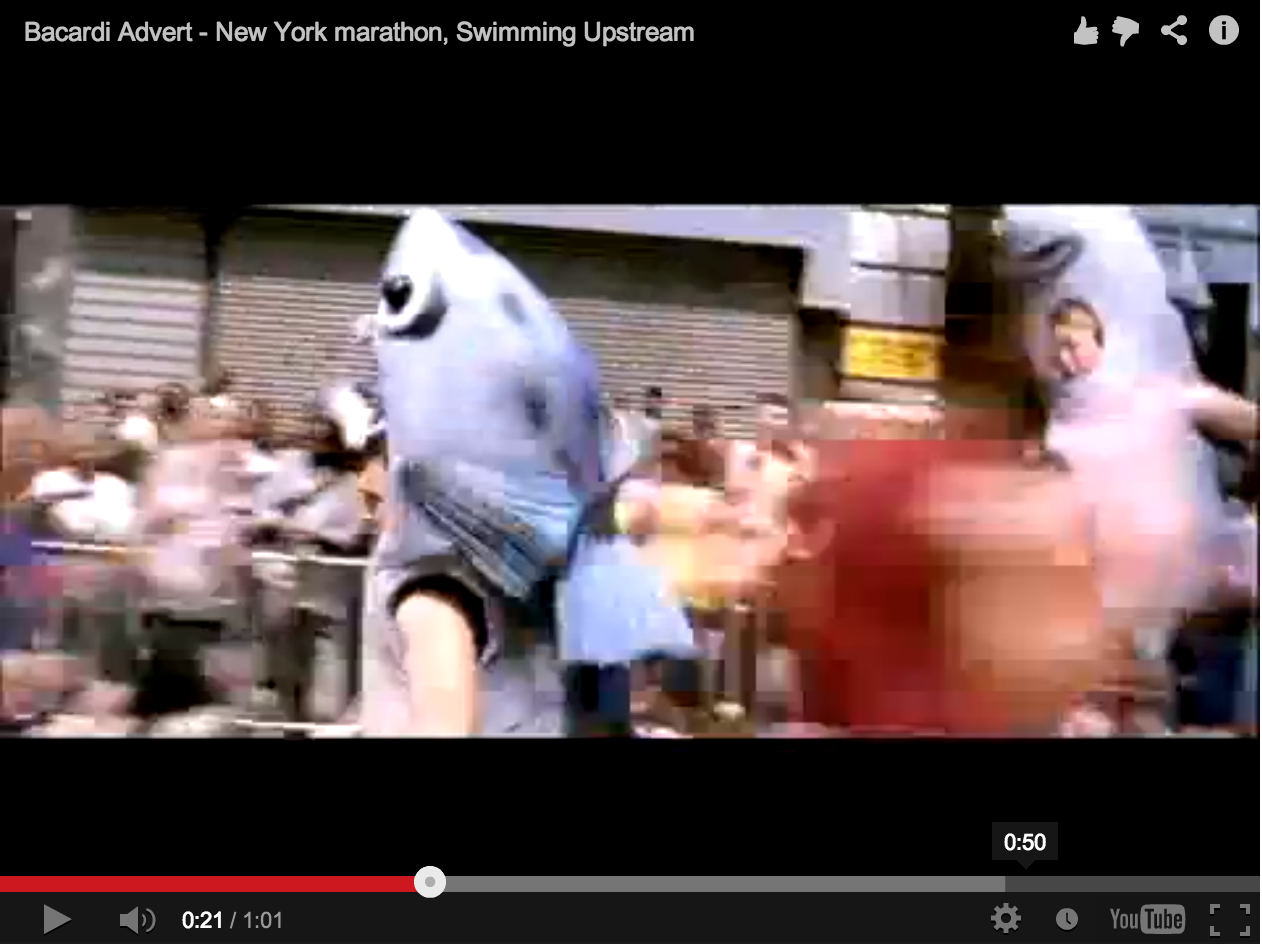 As covered in Boing Boing, who covered the tale of the Bacardi comercial that stole its concept from the Cacophony event of the Salmon Running upstream of the runners at the San Francisco Bay to Breakers. 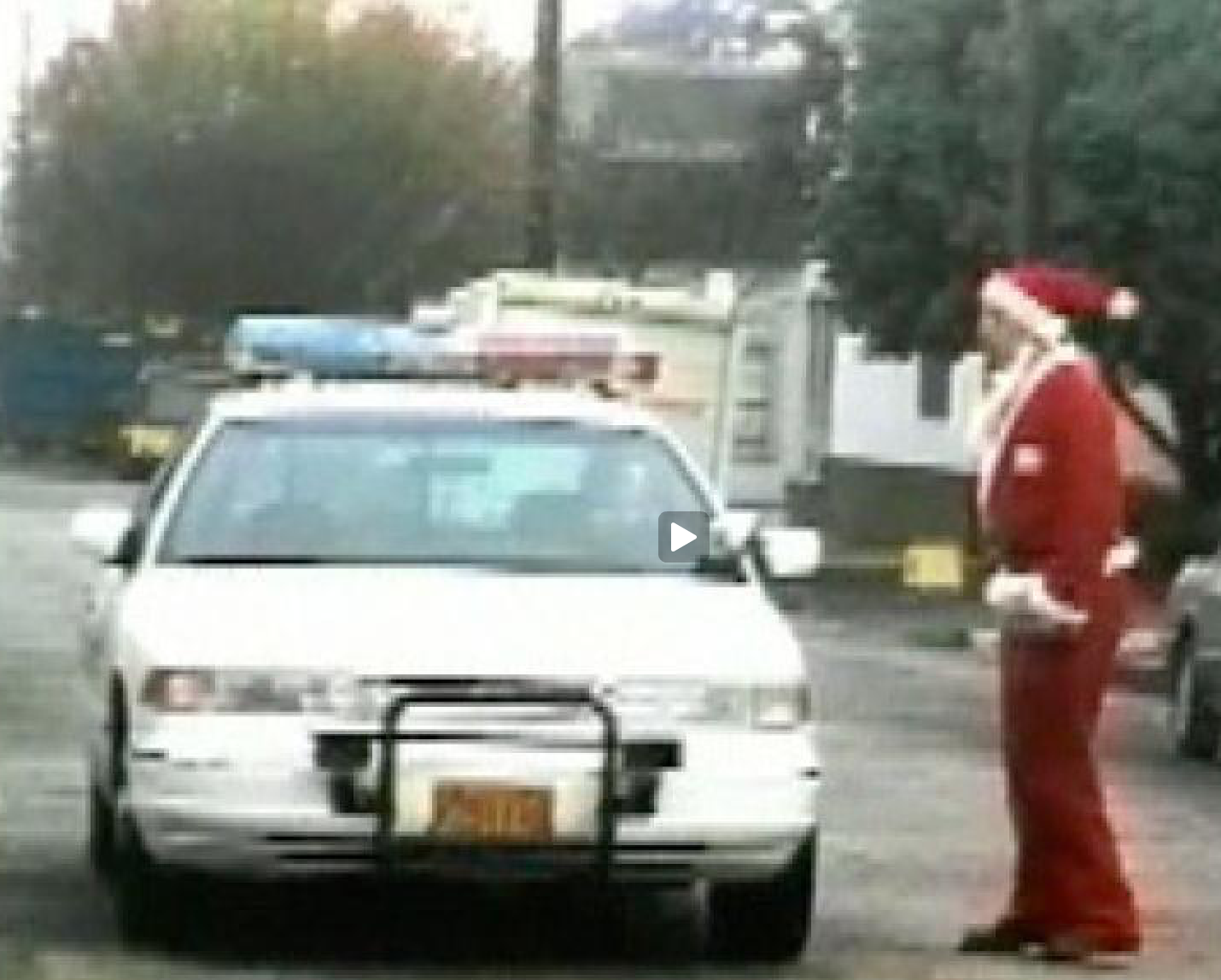 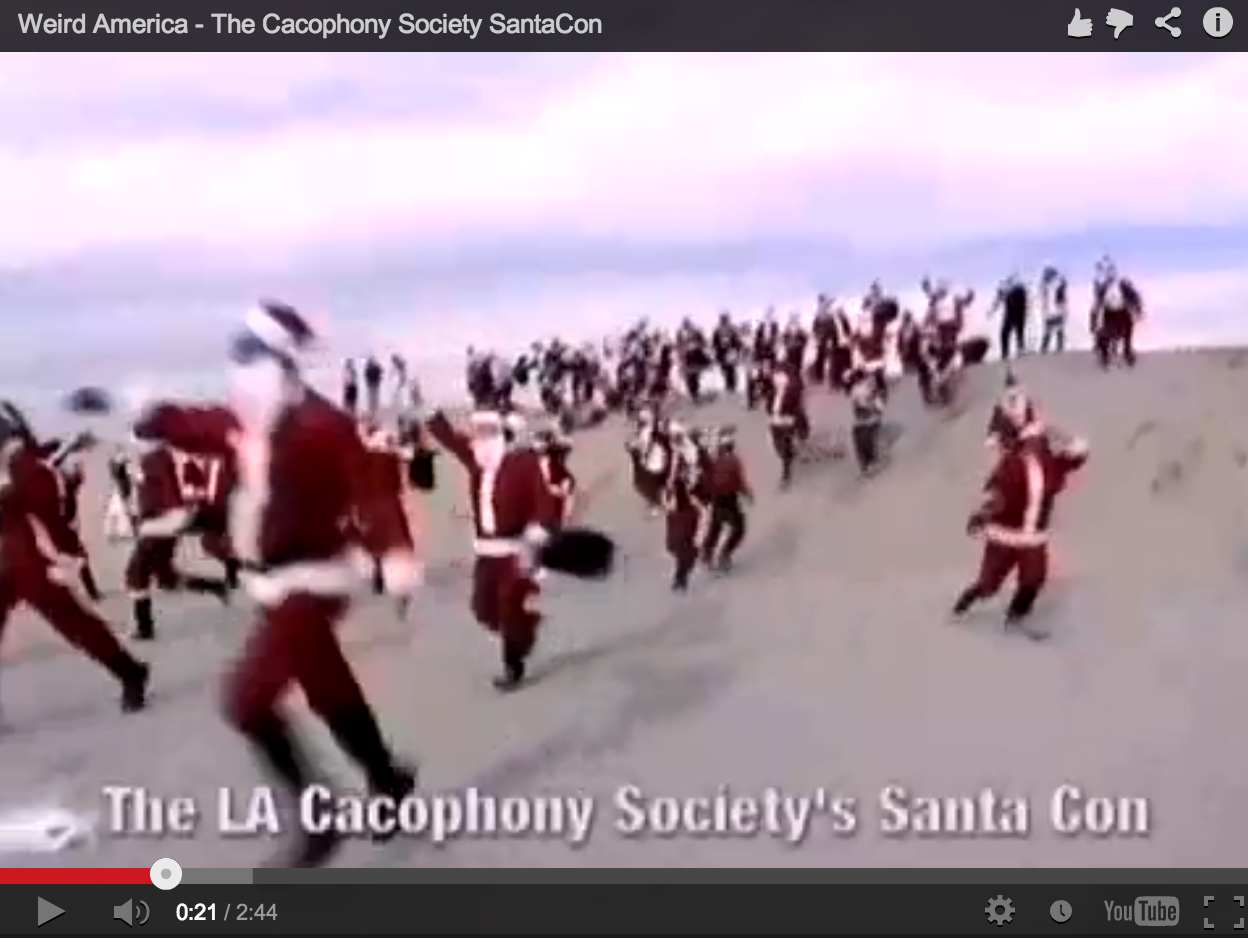 The Santas  for their 5th Cacophony vacation invade Los Angeles and Weird TV  was there for the fun among the sand,  glittery stars, and top tourist spots. 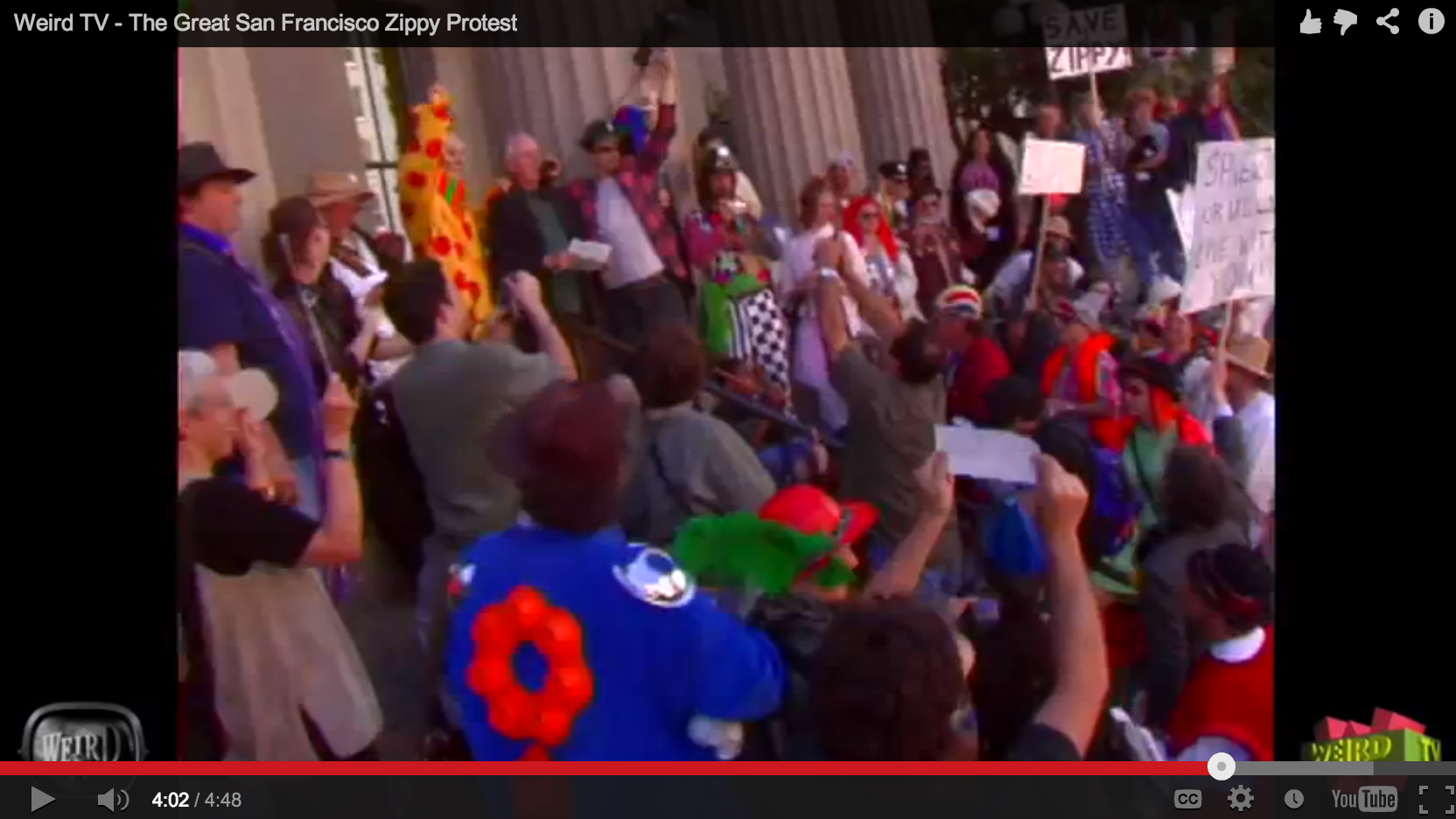 The great Zippy the Pinhead protest to restore the Bill Griffith cartoon to the San Francisco Chronicle,  led by Bishop Joey and the 1st Church of the Last Laugh as documented by Weird TV.